Tips and Audio Tests for Digital HiFi and HighEnd

Despite what you might think about high-resolution audio, i.e. the playback of high-res music using a PC, that only digital information in the form “0” and “1” is processed and that you should not be able to really hear any differences when using and combining the digital components. It’s worth at this point to experiment a little.

Of course, the differences in sound in digital audio are by far not as noticeable as, for instance, by different Movine Coil pickups on the same tonearm of a high-end turntable and the analog DAC output stage, which often has more of an effect on the sound of a DAC than the converter chip itself. Even so, the attentive listener will conclude that there are also numerous possibilities with this type of music reproduction in order to get the optimum sound from HD music files.

In the following we will offer a few HiFi tips and USB audio tests, which should encourage you to investigate the possibilities of USB HiFi and High-End and use simple means to accomplish this:

As soon as a piece of music has been recorded and then reproduced in the form of a digital or analog artifact, we only hear a near copy of the original recorded sound - it will never sound the same as the original. However, the listener’s experience and personal preferences determine how deeply we experience the music at a technical and personal emotional level and also how we judge the quality of the recording and playback.

Prerequisite #1 – The listening room
By far the most important and often seriously neglected link of the chain. If the room has too much/too little reverb, if it dampens too much/too little, if it generates standing waves (especially a problem for the bass range), then the best chain can’t help that the sound is subconsciously judged which of the components are a better or worse to handle the problem of the room.

Prerequisite #2 – The volume
This must be the same for all listening comparisons. Helpful here would be, for example, a smartphone-app which display the volume in dB which then let you equally adjust the level of the various components with a sinus tone and mark this on the volume control for the listening test.

Prerequisite #3 – The components
The basic components such as amplifier and loudspeakers should be the same in all the following described tips and during the tests only one variant of the settings/device should be changed and tested. We assume that high-quality components are used, so that every aspect comes under scrutiny, active speakers (without built-in digital equalizer/filter) are perfect for evaluating the bass, and preamps (best: how to build your own tube preamplifier with triodes) / monitor controllers with linear analog volume controls are to be preferred over those with digital level limiters.

This should really be called adaptive vs. asynchronous vs. synchronous. However, since the synchronous mode is mostly used in the professional domain in external AD converters (that is, by conversion of analog to digital signals) it plays no role in high resolution audio.

In a pure technical sense it’s very involved to achieve asynchronous mode and requires complex circuits, which of course affect the supplied signal to some degree. The adaptive mode is, as it were, “native” and “plain”.
It is finally up to the implementation of the overall combination, including the analog output, if this sounds good or not.

This has been a bone of contention from the very beginning concerning electronic reproduction or recording of music. And that’s exactly why so much effort is put into this. Cabling unquestioningly has an effect on sound., But digitally? With “0” and “1”? Try the experiment and test a nine-foot (3m) long USB cable against one of the same type which is less than 27.5 inches (70cm) in length. Your ears will be opened to further experiments and discussions after this.

No matter which operating system is used for audio reproduction, reproduction with USB audio requires that the audio data are directly, without being further affected by the PC, passed for conversion to the DAC at the sampling rate/bit depth specified in the audio file. And this of course means that all internal system and apps signal tones should be avoided which could interfere with playback. And if you decide to use Windows (keyword: kernel streaming, WASAPI and Direct Sound), MACOSX (keyword: Hog and Integer Mode) or Linux (keyword: kernel streaming, preferably real-time), you should use a computer dedicated solely for audio playback and configure it appropriately. That’s easier than it sounds and quickly done by Windows and MAC users. Those who have a bit more confidence and want to get the optimum sound will find that there is no way around Linux.

Important here: One of the above mentioned file formats should be used, as all of these formats are the basis for high quality. This means: lossless compression or uncompressed. Additionally, some of these save metadata such as album cover and other information. For today’s computers it’s child’s play to uncompress a compressed file in real time for the listener and play it. Differences in sound? This is easy to test for yourself: Use an uncompressed music file (such as WAV or AIFF) starting at 24/96, convert it with a good audio format converter, keeping the bit-depth and sampling rate, to a lossless compressed format and compare…and yup, it’s true. Recording studios record in WAV for a good reason.
However: The differences are so marginal that it’s not worth it to reconvert the format of the music collection.

In addition to the above mentioned reproducible tips – and assuming a good listening chain- without a lot of money, technical equipment and know-how, here are a couple of suggestions for an optimum test procedure: 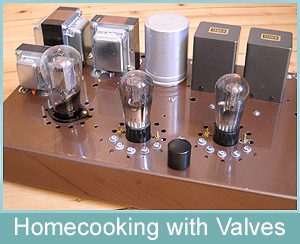